THANKS for asking why I quit posting my Monday Morning Weigh In number...

At first, it was just that I forgot to do it. Weigh myself, that is. So, then, it would be Wednesday or Thursday before I thought about getting on the scale -- so a MMWI didn't make any sense.

Then, I realized, IT DOESN'T MATTER. It never has. The number, I mean.

If you know me, you know I have never cared what that number was....

When I originally went to Fat Camp (in 2016), it was because I had become so sedentary, I was afraid if I didn't blow myself out of my Lazyboy, I'd spend the rest of my life sitting in that chair.

Because I weighed over 300 pounds, my choices were limited. I wanted to take Lilly to New York City, but her parents were afraid I'd keel over from a heart attack. AND WHO COULD BLAME THEM??

A year later, when I went back to Fat Camp, I had lost about 80 pounds...but I no longer thought of what I was doing as a "diet"...or even a "change in lifestyle"...

Because my choices are NO LONGER limited. (and, as you know, Lilly and I had a GREAT TRIP to New York City!) 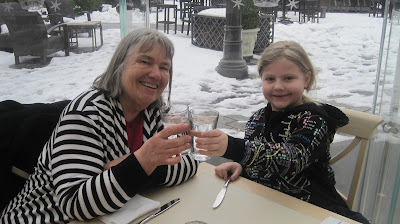 I'm living a WAY different life today. And I am grateful. I eat breakfast every morning, I go to the pool five or six times a week, and I am aware of what a "normal" portion of food looks like.

But, make no mistake -- I try to NEVER HAVE THIS CONVERSATION with anybody. I still believe it is the most BORING THING IN THE WORLD TO TALK ABOUT. Who gives a shit about what I'm eating or how often I go to the pool?

There is no magic bullet. The way to lose weight is to eat less and move more.

So, that's what I'm doing. Most of the time. But it does get discouraging when I think I've done all the right things, and the number stays the same for weeks. Apparently, I decided to continue doing the right things, but stop getting on the scale. My friend Nancy (who has also lost a lot of weight) told me her body sometimes needs to plateau.(a state of little or no change following a period of activity or progress.)

That felt right to me. I can enjoy a plateau...

And, yes, I feel wonderful.  I have great energy, and I'm looking forward to the summer, and some traveling, and LOTS OF ACTIVITIES....and I'm wearing clothes that I NEVER though I'd get into. This pair of Ralph Lauren jeans is a SIZE 18..!! 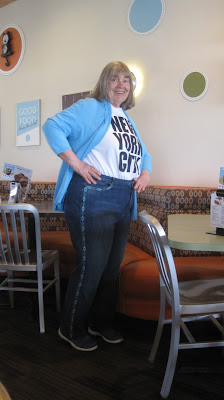 But, I guess I'm done with the MMWI.