Rock Creek Marina is about five minutes from my house.  Lilly went to a day camp (called Bug Camp) last summer.  I've told you about their wonderful boat rides..

And they have many activities for families and children. Last week, they had a Spring Fling -- and Lilly was so excited. Warren is too small to understand what it was all about...but HE LOVED IT. 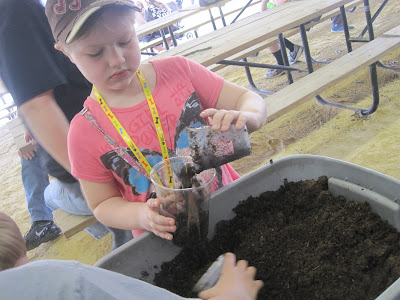 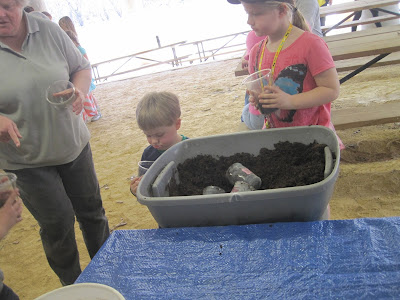 Lilly and I went directly to Target after I picked her up from Sunday School. I had talked to Mary that morning, and knew that her store was sold out of most things...and I feared we would be too late....It was almost Noon before we got there....


I was checking out, and the clerk said, "that will be $165.38"....and I thought Lilly was going to pass out. After we got in the car, she repeatedly asked me how much money I spent.  (Obviously, our shopping trips are usually to thrift stores, and normally, I make her choose just one 88 cent purchase...)

She KNEW this was an extraordinary day...and apparently, now that she is seven, she's figuring out the VALUE of money.  The sum of $165 seemed colossal to her.

After I said the number three times.  Yes, I spent One-Hundred-And-Sixty-Five-Dollars....she said, with a hint of mischief, "can I tell Grandpa?"

Over the years, Mary Mulari and I have ENJOYED A LOT OF SHOPPING. In different cities, looking for various things.
Because, on Sunday, April 17th, Target would unveil their Marimekko collection. If you are not familiar with the brand -- click here for the Wikipedia version:

Mary went to her local Target early on Sunday morning -- and they were NEARLY SOLD OUT OF EVERYTHING....

However, it was a different story at my Target store. (My Iowa German population, versus Mary's Scandinavian neighbors, eh?)
SO, with all these wonderful choices -- WHAT DID I BUY??
at 2:00 AM No comments:

The Splendid Sampler™ is an internet sew-a-long created by Pat Sloan and Jane Davidson. It is an EPIC sew along...
The new block designs come out twice a week....on Sunday morning and Thursday morning. I'm doing this with my TMBC...and, therefore, it is my pleasure to BLOG ABOUT IT every Wednesday.
************

The Splendid Sampler has CHANGED OUR TUESDAYS...and I honestly can't remember what we used to talk about before we started doing this...


Weeks ago, I got an email from a blogger friend who was enjoying my Splendid Sampler Wednesdays, but felt she didn't have the time to do all the sewing. I said she shouldn't feel pressure to do every block or catch up with anybody. Just start now!!  Go back and pick the blocks that interest her...and do them whenever she felt inclined or had the time.

I suggested she take a page out of Nancy Zieman's book -- 10-20-30 Minutes To Sew.  Remember the philosophy of that wonderful book?  You can get a lot accomplished, if you just plan ahead and discover your little pockets of time...

Laura, from Puyallup, told me I should visit the Seattle Library.  Of course, that made me curious...
AND NOW I HAVE HUGE REGRET that I never went there.  The next time I fly into Seattle, I am going DIRECTLY to the library.  I'm going to take a tour...!!  This is from the Seattle Public Library website:

*******************
The Seattle Public Library celebrated its 100th anniversary in 1991, only two years after completion of a remarkable $4.6 million restoration project to assure the long-term luster of the Library's six Carnegie branches; the project received a prestigious honor from the National Trust for Historic Preservation.

The focus soon turned to the Library's physical needs in the upcoming new century and these ambitions were formalized at the best possible time. Circulation had soared past 5 million items by the mid-1990s, the Library's annual donations topped $1 million, and the dot-com frenzy was fueling an economy that seemed to promise a limitless future. Seattle voters in 1998 approved the largest library bond issue then ever submitted in the United States.

The landmark "Libraries for All" bond measure, which proposed a $196.4 million makeover of the Library system, garnered an unprecedented 69 percent approval rate at the polls. The massive measure doubled the square footage in the Library system and resulted in four new libraries in communities without library service, the replacement, expansion or renovation of 22 existing branches and a spectacular new Central Library.

Twenty-nine major national, international and local firms sought the opportunity to design the new Central Library. The Library Board's architectural choice for the project was as bold as "Libraries for All" itself. The surprise winner was Rem Koolhaas and his Office for Metropolitan Architecture in Rotterdam, in partnership with the Seattle firm of LMN Architects. The iconoclastic Dutch architect had no major buildings built in America when the Library Board selected him over two other finalists, but the board's choice seemed insightful a year later when Koolhaas was awarded architecture's highest international honor, the Pritzker Prize.

This 11-floor, 362,987-square-foot library, a dazzling avant-garde symphony of glass and form, has many innovative features, including:
A "Books Spiral" that displays the entire nonfiction collection in a continuous run;
A towering "living room" along Fifth Avenue that reaches 50 feet in height;
A distinctive diamond-shaped exterior skin of glass and steel.

The new Central Library's unorthodox shape, unlike any other building in Seattle, is the result of its use of five platform areas to reflect different aspects of the library's program; its form indeed follows its function.

It includes a 275-seat auditorium and parking for 143 vehicles.

The Library for more than two years provided services in a temporary 130,000-square-foot library in the Washington State Convention and Trade Center at 800 Pike St., while the new Central Library was being built. 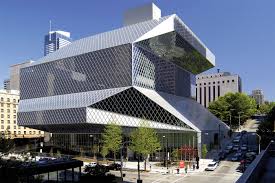 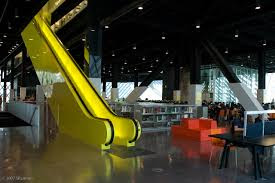 The new Central Library opened May 23, 2004, and immediately prompted international interest. "Libraries for All" was completed in 2008. The final price tag for the project, including donations and other gifts, totaled $290.7 million.

The public was invited to a daylong celebration on Sept. 13, 2008. The Library distributed free commemorative Library Passports and invited people to tour all 26 new and remodeled branches and the Central Library for prizes. The passports featured beautiful color photographs and highlights of each building project. By the Jan. 2, 2009, deadline for the prize drawing, 356 people had visited every Library location and completed a "Library Passport."

The Seattle Public Library was remade on a scale unmatched by any other public library system in the country in order to meet the changed demands of the 21st century.

"Libraries for All" cemented The Seattle Public Library's reputation as a national treasure, shared and appreciated by all. The Library Board adopted a new strategic plan in February 2011. The Strategic Plan will guide the Library's efforts and is intended to set an ambitious course for the future of the Library and the enrichment of Seattle's residents. On Aug. 7, 2012, Seattle voters approved a $122 million Library levy to supplement city funding and preserve the investment in the 1998 "Libraries for All" bond measure. The levy will provide $17 million annually to stabilize funding and address the four areas identified by the community: keep libraries open, more books and materials, improve computer and online services, and maintain buildings.

My sister Ronda has one granddaughter, Memphis, who is about the same age as Lilly. We have a tradition of getting the girls together for some kind of craft activity during their school breaks at Easter, and during Christmas.

With all the excitement of the four of us in a room,  the two girls calling,  "Aunt Rita", "Grandma", "Aunt Ronda", "Grandma"... it can get confusing.

So, on these special occasions -- the girls call us "Grant Rita"and "Grant Ronda". (a combination of Grandma and Aunt -- clever, eh?)

On this day -- our plan was to do one of those goofy craft projects off Facebook (or was it Pinterest?).  You wrap an egg in an old silk tie -- boil it -- and the egg takes on the color from the tie.

What could go wrong, eh??

Now I have to be on the lookout for some small print brightly colored silk ties for next year!!
at 2:00 AM No comments: