Now that Christmas is over (THANK GOD) -- I am also free to write about how my sister Ronda SEWED CHRISTMAS...

At our Sister's Sewing Weekend last fall, Deb did a demonstration -- showing us how to make a pillowcase with no raw edges,

I am happy to report that the pillowcases were a VERY BIG HIT.

As a matter of fact --  we've decided to make them our annual Grant Rita/Grant Ronda after-Christmas-Sewing-Day project with Lilly and Memphis.

SO MANY WOMEN I know sew gifts for loved ones. It's often the REASON we sew!!  And when it turns out the way you hoped -- there isn't a better feeling in the world!!

Of course, I am delighted for my friend LP.  But, sometimes -- things don't go the way you hoped.

The year Lilly was three, I was so delighted about Christmas.  She was getting her first baby doll. For weeks, I'd been making outfits...and I made matching nightgowns for Lilly, and her Mom, the doll AND Sophie...

I had my cousin Linda paint a little train case, using the nightgown fabric as inspiration for the pattern. WOW...

When Lilly opened the gift, she said, "Nice try, Grandma..."

You can see she was MISERABLE about my gift...and we were both quite annoyed with the men in the room, who could not stop laughing...
She never played with the doll or any of those clothes. And I never saw anybody wear the nightgowns.

I was devastated.  So sad, and disappointed.  Lilly's reaction was almost enough to make a girl want to STOP SEWING GIFTS!!

But I was saved by the wisdom of Eileen Roche. Editor of Designs in Machine Embroidery magazine. My friend Eileen is an experienced GIFT GIVER...and somehow, she has come to the perfect ZEN attitude about making gifts for people. She has a very unique point of view...and I have completely adopted her philosophy.

AND, like all good advice -- if you will only TAKE IT -- it could change your life... 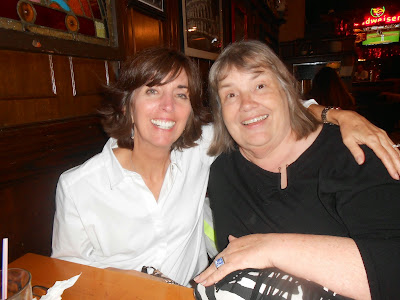 "Here’s how I look at sewing gifts for other people. I pour my heart into it, pick the project and the materials with that specific person in mind and then I throw myself into it. I think about them the entire time. And when it’s complete, I am done – I mean, I could literally, throw it away because I know I already got what I wanted to get. I wanted to honor them with my time, talent and thoughts. I wanted to spend time focusing on them, kind of ‘spending time’ with them (although they’re not there). In my mind, the process is the gift.

So don’t look at the time and energy that you spent as a waste, look at it as a gift to yourself. The gift of thinking, imagining, fantasizing about how much they will love your gift. The fact that they didn’t, well -- screw it. That’s their loss, just a total loss, it’s not your loss."

Every week at TMBC, we do a Sew and Tell. This was going on long before the Splendid Sampler people came along. And, occasionally, we still do sew something other than 6" quilt squares.

I couldn't post this earlier, because the gifts in question were on their way to Texas and I didn't want to ruin any surprises...but it's just TOO MUCH FUN.
So it is quite remarkable that she has time for ANY OTHER KIND OF SEWING -- much less a gift of this massive proportion...LP is on her way to daughter Kim's house in Texas. Kim has three children. Daughter Whitney from Illinois will be joining them. Whitney has four children. (all teenagers).  The entire family loves the Harry Potter books and movies -- and their Christmas in Texas has a theme.

SO OF COURSE GRAMMY made everybody their own personalized reversible placemat...
But there isn't a better feeling in the world, is there??
at 2:00 AM No comments:

The Splendid Sampler™ is an internet sew-a-long created by Pat Sloan and Jane Davidson. It is an EPIC sew along...
The new block designs come out twice a week....on Sunday morning and Thursday morning. I'm doing this with my TMBC...and, therefore, it is my pleasure to BLOG ABOUT IT every Wednesday. *******************

If you come here every Wednesday to read about our Splendid Sampler progress...I don't want you to be disappointed.  But, hey -- WE ARE SIMPLE MORTALS, people...and mothers, grandmothers, doing the best we can to survive these blankety holidays.  SO I DON'T HAVE ANYTHING NEW TO REPORT...

But -- just in case you missed this last update -- WE'LL EVENTUALLY GET TO IT!!

Here's the thing....this time of year is SO DARN BUSY -- it's hard to keep up with two block designs each week. MUCH LESS all the bonus blocks. Holy Cow. You'd have to be some kind of Superwoman to do that!!
Even though Linda and her husband Don were out of town for a ONCE IN A LIFETIME trip to New York City to see the Macy's Thanksgiving Day Parade -- when she came home, she DID ALL THIS SEWING!!
And, then, she did all this... 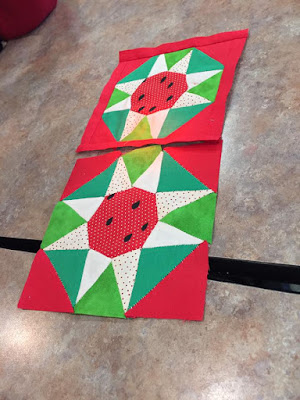 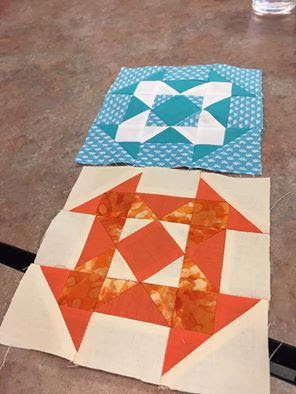 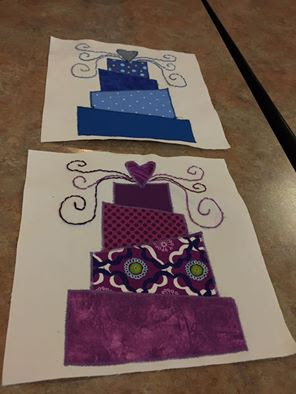 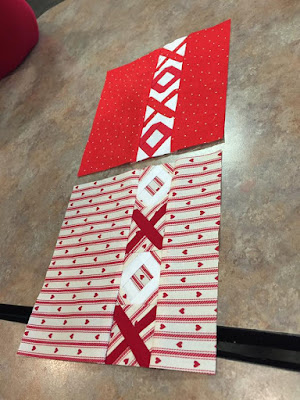 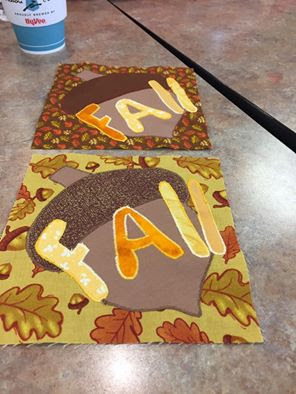 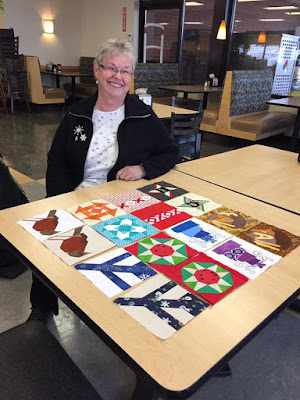 In the history of little girls and their dogs, there has never been a better pairing than Lillian and her Sophie. Sophie was just a puppy when Lilly came home from the hospital -- and that little dog has always been there for her, every single day...

When she's happy -- and when she's sad. I believe having Sophie changed the person Lilly will grow up to be. 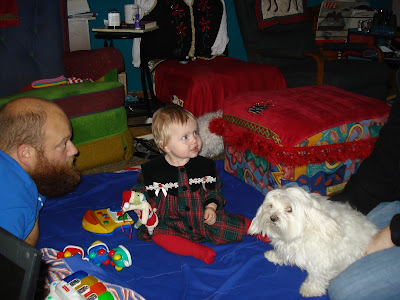 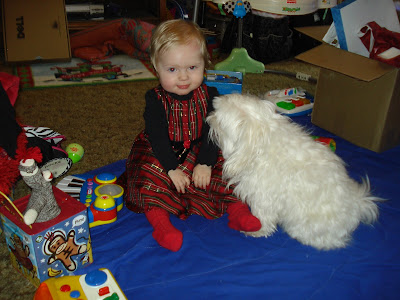 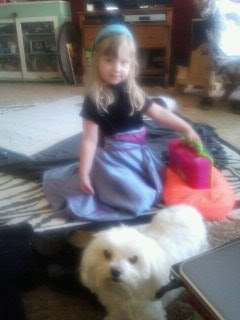 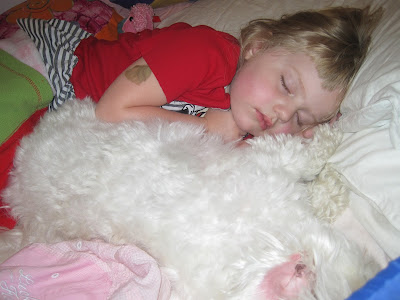 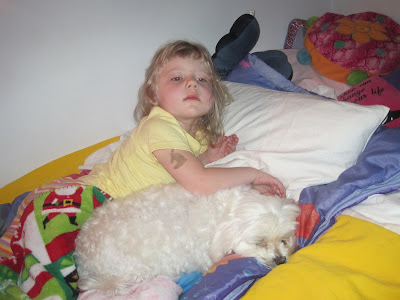 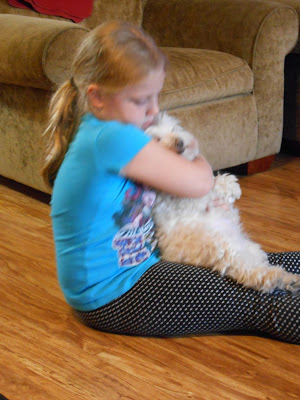 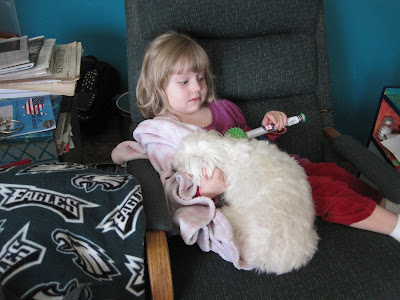 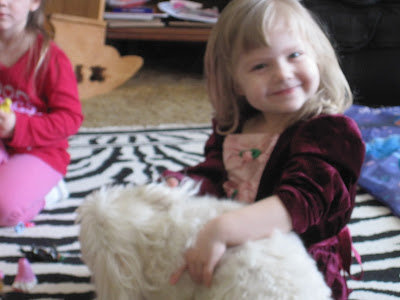 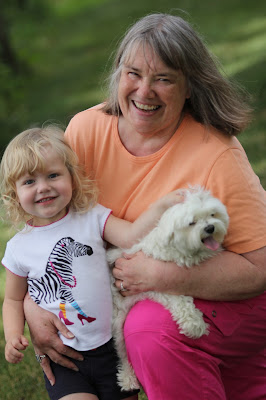 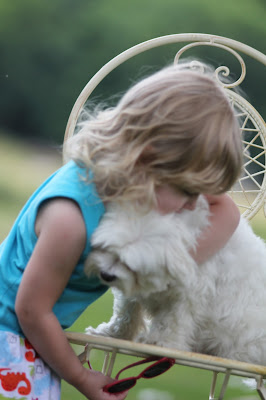 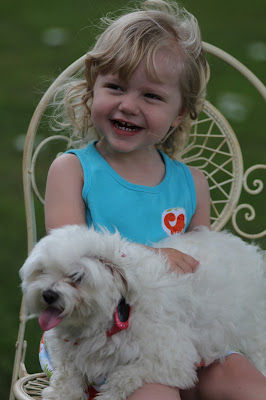 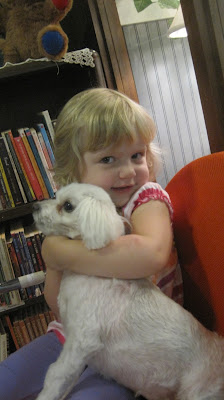 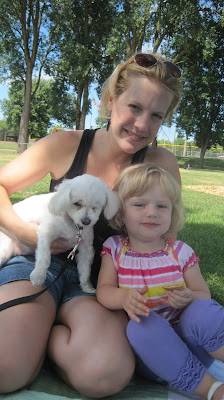 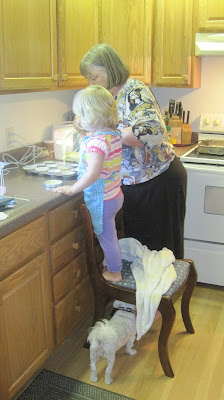 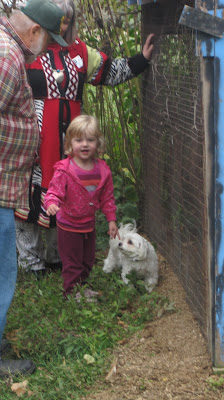 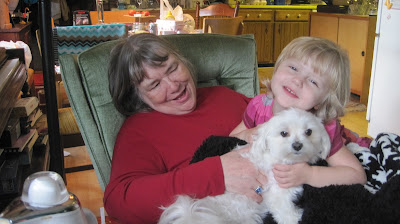 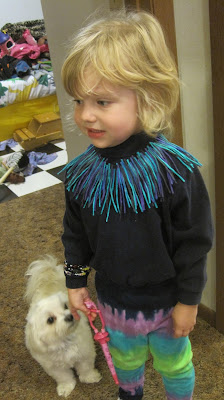 Last week, the kids were bickering one morning, and I scolded them. Like good Grandmas everywhere, I tried to make it a lesson.

Me: Sure, right now, hon. But someday, you'll be grown up -- Sophie will be gone, and I’ll be gone -- but you’ll still have Warren.

Lilly melted down. She ran to hide on the stairs, just sobbing. Instantly hysterical and inconsolable. Who could blame her? She just lost her best friend and her Grandma...

WHAT IS WRONG WITH ME???

Hey -- it's going to take me a few days to RECOVER from Christmas. I'll get there...and in the meantime, John forwarded this to me. He's Italian...and this reminded him of his own mother...


An Italian MaMa
Mrs. Ravioli comes to visit her son Anthony for dinner.
He lives with a female roommate, Maria.
During the course of the meal, his mother couldn't help but notice how pretty Anthony's roommate is.

Over the course of the evening, while watching the two interact, she started to wonder if there was more between Anthony and his roommate than met the eye.
Reading his mom's thoughts, Anthony volunteered, "I know what you must be thinking, but I assure you, Maria and I are just roommates.''
About a week later, Maria came to Anthony saying, "Ever since your mother came to dinner, I've been unable to find the silver sugar bowl.
You don't suppose she took it, do you?"
"Well, I doubt it, but I'll email her, just to be sure."
So he sat down and wrote an email:
Dear MaMa,
I'm not saying that you "did" take the sugar bowl from my house ; I'm not saying that you "did not" take it.
But the fact remains that it has been missing ever since you were here for dinner.
Your Loving Son
Anthony
Several days later, Anthony received a response email from his MaMa which read:
Dear son,
I'm not saying that you "do" sleep with Maria, and I'm not saying that you "do not" sleep with her.
But the fact remains that if she was sleeping in her OWN bed, she would have found the sugar bowl by now.
Your Loving MaMa