My baby sister Deena RETIRED!! After 30 years of hard work in the Agricultural industry -- much of it with ADM (Archer Daniels Midland)-- she was offered an "early retirement" -- and SHE TOOK IT..!!
I made our mother's macaroni/chicken salad (you know the one -- it has walnuts and grapes)...and, of course, POPOVERS...

When Ronda told me she was making a blanket for Deena, I said, "sure...give her a wonderful gift... just to make me look bad".

Then, it dawned on me -- I COULD GIVE DEENA A NEW KENMORE SEWING MACHINE...

Thanks to Facebook, I've realized what fabulous machines these old Kenmores were. ALL three of us sewed on a Kenmore #158....for about 20 years...


BUT if I give this one to Deena -- I'LL STILL BE ABLE TO HUNT FOR ONE for myself. And, honestly, isn't the HUNT half the fun??
And I am hoping she enjoys this Kenny for another 20 years...
at 2:00 AM No comments:

Today, I'm attending a funeral.  My cousin Greg died last week.  He had a massive heart attack...he was only 60 years old.

No amount of money can buy you a minute more of life.

C'mon -- enough with the judgement!!

Apparently, none of you will admit to belonging to "Bachelor Nation".

That's okay. I have never been ashamed of my television-watching-low-standards. And, certainly nobody thinks the Bachelorette is going to win any kind of awards. But this summer, watching this show with Lilly has brought much joy into my life. And it has kicked off MANY VERY INTERESTING conversations!!

Hannah was disturbed when her dozens of bachelors kept telling her Luke P. is a liar, and a manipulator. She gets sick of them always talking about him -- when they should, of course, be focused on HER...

Last week, when I was picking my cousin up from the airport -- there was a lot of construction -- and for a mile or so -- many of these signs...

The next day, I told Lilly about the "Stay in your Lane" signs...

She laughed and said, "five miles down the road, was there another sign that said

Hey -- I know this is private joke. You will NOT get it if you don't watch the show...and that's okay. I'm just saying...this girl is wise beyond her years!!

About five years ago, I found this great bench at a garage sale...it was only $5. At the time, it was upholstered with a boring brown pineapple print...
So, the bench was a great candidate for a Grandma Camp MAKEOVER...
That way, I can just wipe off the messes...and maybe the weather won't have such an impact...

Next week, I'm having a porch luncheon -- and I'll unveil  the new bench Warren helped me renovate.

If, when he grows up, Warren remembers anything about the summer he was SIX -- I'm sure he will believe he spent every day building legos.

The GIGANTIC lego table Uncle Ross built for him takes up most of our little back bedroom...
Warren is a very easy going little boy. He loves helping..

I already told you about Kenmore #2 -- my sister Ronda's new machine....

One of the best relationships in my life is the one I have with my cleaning lady.

Carrie comes to my house every Monday, and she simply makes my life worth living. I'm sure you are sick of hearing about it...but I cannot imagine my life without Carrie. She knows my house better than I do...and no matter what the job is, she helps me GETS IT DONE.

There is the usual cleaning, of course. But she also helps me in the spring and the fall to change out my wardrobe.  She helps with the annual window washing -- or the once-every-40-years new carpeting ordeal.  In November, she winterizes our screened in porch, in December she brings up the Christmas decorations...well, you get the idea.

She also cleans the refrigerator, and has sometimes helped CLEAN MY CAR...


a very helpful or valuable event, person, or thing.


Carrie is the daughter of my cousin Kim -- and she first started cleaning for me when she was 14 years old.
Elizabeth is 12 years old now, and guess what? SHE WANTS TO LEARN HOW TO SEW..!!

Fast forward....While raising her two kids, Carrie mostly only sewed to make their Halloween costumes.  She had a cheap Singer that was nothing but trouble...so one day, she said these words, "Please be on the lookout for a good used sewing machine -- I think Elizabeth (now 12) would like to learn how to sew...."

And you know what happened next...

How do I know it had never been used?

The seam ripper was in it's original cellophane...
at 2:00 AM No comments:

Ever since I went to Fat Camp in November 2016, I have been going to the pool four or five times a week.

I am SHOCKED that I've been able to incorporate this healthy habit into my life.

You won't be surprised when I tell you that I buy my swimsuits from thrift stores.  At this point, I must have about 30 suits....And, hey -- some work out better than others.

I am delighted to report that I have perfected the art of Frankensewing a swimsuit.

There is a big basket of thrift store swimsuits in my basement.  And I  often cut them up...for extra fabric...

Like this suit.  It had a typical problem -- TOO MUCH boob action...so this is a modification I've done many, many times.


I often cut up two swimsuits to make one. Sometimes, the lycra wears out at the back seam of a suit, so I'll cut the bad part out and replace it with a new piece.

The other day, I wore a new suit for the first time -- and it seemed to fit fine.  But after an hour of exercising, I realized the armhole was rubbing.  So I cut it down, and sewed a matching strip of t-shirt knit around the armhole.  PERFECT.

Really -- it's EASY to refashion a swimsuit.  The biggest challenge of sewing on lycra is dealing with all those pesky skipped stitches.  The key to my happiness, OF COURSE, is starting with a new Schmetz STRETCH needle.  (I like the #75).
at 2:00 AM 1 comment:

Out of the Mouths of Babes...

So, the 2019 Grandma Camp is plugging along. As you know, I track down many "free" kids activities...the Parks Departments, and the area libraries...Other than a few Grandma Rita Melt-downs, things have been going pretty well.

I try to record movies I think the kids will enjoy...and we were considering our options...

I said:  We could watch "The Batman Lego Movie".

Lilly:  The hero is a rich, arrogant guy who is completely self-absorbed.

Of course, I deleted it immediately.

For awhile, we settled on the Nickelodeon channel.  But I'm not a big fan of  cartoons -- so when Spongebob morphed into a show I never heard of, I hit the pause button,

Lilly: The Loud House.  It's a good show, Grandma.  Not like the usual sexist cartoons.

Me:  (thinking, did she really just use the word sexist?)  What do you mean?

Lilly:  The Loud House is full of kids, and some of their friends are black or hispanic -- and his best friend has gay parents.

Later in the day, the kids were going to paint some jewelry boxes (it was over 100 degrees that day, so they did a treasure hunt in the basement)...

OF COURSE, They both wanted the same box...so I was trying to come up with a way for them to choose.  Lilly, of course, wanted me to pick a game she could win -- maybe three shakes or a card game.  I said, "no, it has to be a game of complete chance...like rolling the dice or drawing a card..."

Warren piped up and said, "Yes, Lilly.  Grandma has to be fair to the under-developed."

The three of us broke out laughing...Lilly was literally rolling on the floor... 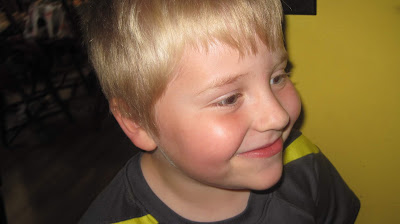 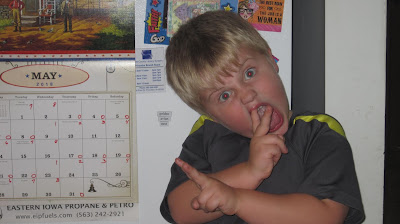 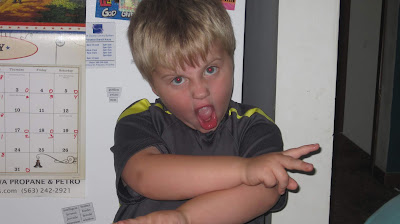 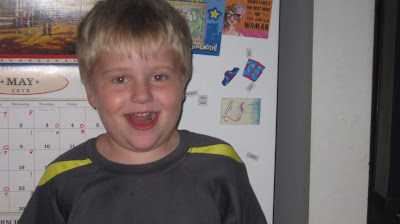 Really. That's exactly how it happened...Ronda went to park the truck, and I JOKINGLY said, "I'll go inside to see if they got your sewing machine in..."

Then, for the first time in her life, Ronda walked into the Salvation Army...
She purchased her Kenmore #158 in 1972 when she and Dean were stationed in Alaska. It was the first major purchase she made as a married woman...and she loved, loved, loved that sewing machine. She sewed her daughters look-a-like dresses for Christmas and Easter.  For the next 25 years, it was a workhorse that NEVER let her down.


Honestly -- there wasn't a scratch on the cabinet,and no wear at all on the sewing machine itself. Everything looked brand new...so the good news was that it like it had NEVER BEEN USED.

Of course, that's also the bad news.  A machine that has NEVER BEEN USED...but has been sitting inside a cabinet for over 40 years is completely froze up....

Can you guess what we paid?

So, I called Ronda and she brought her truck to my house. We loaded up the OLD table, and my plan was to drop it off at the Salvation Army. (frankly -- because of it's poor condition, I was afraid the Goodwill Store wouldn't take it.)

Ronda has never been in either one of these stores....(go figure!)

After we  put the old table in the (unmaned) donation area...I said, "why don't you park the truck and I'll run inside to see if they got your Kenmore yet."

Because -- to back up -- several weeks earlier,  Carrie asked me to be on the lookout for a good used machine for her 12 year old daughter.  The very next day, I found a nearly-unused Kenmore #158 for $25.   In the 1970's, my sisters Deena and Ronda and I all sewed on Kenmore sewing machines. (we recently realized we all had different versions of the #158.)  When I became a Viking dealer, my head was turned by all the expensive, fancy computerized machines, but I always regretted getting rid of my Kenmore...which I sewed on for 20 years...and LOVED....

When I showed that machine to Ronda, she really, really WANTED IT...


But this  machine was promised to Carrie. And there was no way I was going to disappoint my wonderful cleaning-lady, who, frankly, makes my life worth living...

Elizabeth was DELIGHTED with her new sewing machine...and I realized (thank you Facebook) that there are a LOT OF PEOPLE out there who still love and adore their reliable Kenmore#158's.  There were thousands of them manufactured...so I'll be on the lookout...

So, two weeks later, here we are, on this rainy night....at the Salvation Army, dropping off my OLD chrome porch table...

And when she came inside... 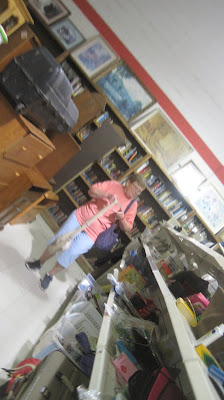