From 3 years ago...another Mary Mulari moment... *********** Lilly and Mary have been friends for a long time. They actually share a room. When Mary comes to Iowa, Lilly helps get her room ready for Mary...and the, Mary leaves her money. $4 is the going rate...We've done many things together, Lilly has attended a Ya Ya Sister show.

Lilly has shared some deep thoughts with our friend Mary...
So, when Marimekko came to Target, Lilly knew we were on a mission for Mary Mulari. Although, she had a hard time pronouncing the word "marimekko"....she just couldn't get it right...there were too many vowels, and it was frustrating for her...
Then, after spending the WORLD SHAKING amount of $165 at Target -- we headed to the Goodwill store...
Of course, it's just possible that nobody wants a life-sized sock monkey...but you've gotta admit -- IT IS A BARGAIN.

Lilly found him, and immediately said, "TAKE A PICTURE FOR MARY FONS, GRANDMA!!"
When we got in the car to drive home, Lilly said, "We've had a very merry day haven't we, Grandma?"

Surprised by her choice of words, I said, "what do you mean?..."

Then, with a broad smile, she said, "Mary Mulari, Mary Mekko and Mary Fons..."

We both laughed...she was SO PLEASED with herself.

I Sewed A Chair

If this thing is working, I'm posting this ORIGINAL BLOG POST on Wednesday, February 27.  Today, Mary will be at an all-day-TMBC-Library-Sew-In.  We are workshopping a new pattern for her...and I think we'll be good at it!!

It's so nice to have something to look forward to at the  end of this BRUTAL winter. I can't even count the number of days school has been cancelled, and I haven't been able to get out of my long driveway.

I HAVE LOTS OF TIME ON MY HANDS...so....what worthwhile project could I be working on? That would become a kind of a "momento" of this horrible winter??

For many years, I've struggled to find just the right CHAIRS for my kitchen table. The table is perfect, you see. It's a 60" round oak table I bought for $150 -- in Pennsylvania -- as I was leaving that state and moving to Iowa. (Kathy talked me into it...and, well, heck, we were already renting the moving van...It seemed like a good idea at the time.).

So, I love the table. But I've had about a dozen different sets of chairs over the years. And I've never found just the right chair...They were either boring, or uncomfortable...or they fell apart, or were too heavy.

But then they suck.


The back of this chair is something very different...and I actually got Chair #2 done in time for Mary's visit.


TODAY -- Rhonda Pierce will be leaving for Puyallup -- and the fabulous SEWING AND STITCHERY EXPO.  There is no better sewing show in the world -- and I always said it was the biggest sewing party of the year!!

Right now, I don't have access to all my wonderful Sew Expo photos -- but here are a few favorites from the year my sisters came to the show.  wow.  Did we have a good time or what??

Last year, I had three sisters come to Sew Expo. Here's my favorite picture of my sister Deborah at the market... 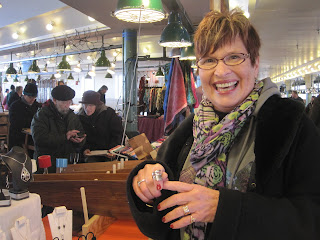 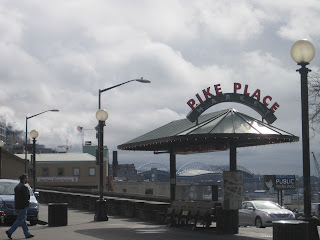 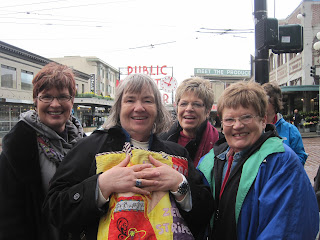 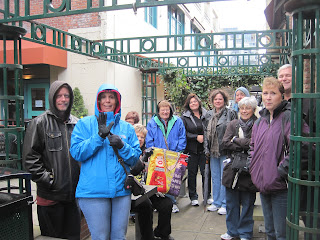 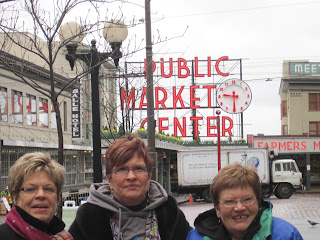 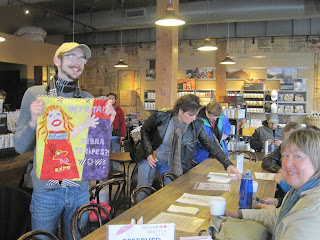 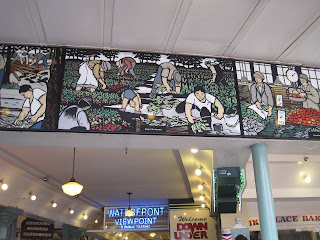 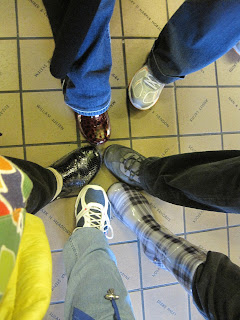 Mary arrives today.  So -- IT'S ANOTHER RE-RUN, PEOPLE.  I mean, honestly -- I have beds to make, a basement to clean...food to cook...itineraries to prepare....

Two years ago -- I wrote this about Mary's first day...and, hopefully, we'll be doing some of the same things...with someof the same people...

On Mary's first day -- I took her to my YMCA for a Swimfit class. Of course, you'll have to take my word for it because I forgot to take a picture of us in our swimsuits....

Of course, Mary is in terrific shape -- and she was dancing circles around me in the pool. Afterwards, we met up with the TMBC crew and went out for lunch... 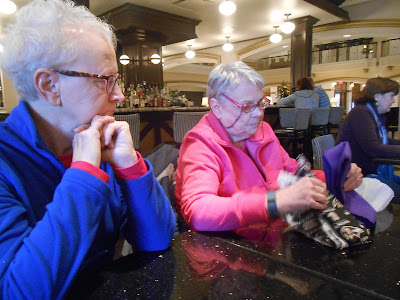 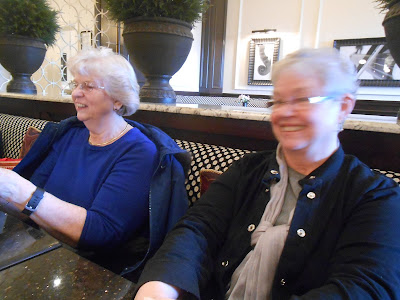 It does NOT SEEM POSSIBLE that it's already been TWO years since I took Lilly to New York City. As we ramp up to her 10th birthday -- I am planning something special, but it's not "announceable" yet.

This is from a blog post I wrote two years ago, but never quite got around to posting.  It involved one of my favorite activities -- FRANKENSEWING...

Growing up in Iowa, I never heard of Shoofly Pie. But it is one of my "MUST EAT" items whenever we visit John's family in Pennsylvania.

And, years ago -- when Ross was living with the Keefer's in Pennsylvania -- he, too, became addicted to this unique pie.  He actually MAKES IT HIMSELF...and has taken it into work for potluck food occasions.


Here's what the internet has to say about Shoofly Pie: 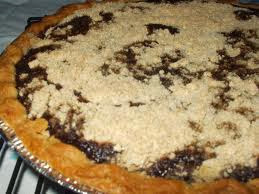 Visit the Lancaster area of Pennsylvania and indulge in a Pennsylvania Dutch original, the Shoofly Pie. Also know as Shoo-Fly Pie, and Shoo Fly Pie.

First time visitors to the area always comment on this pie and its strange name. Most of the area restaurants and bakeries sell this favorite pie. The pie is more like a coffee cake, with a gooey molasses bottom.Pennsylvania Dutch cooking is indigenous to those areas of southeastern Pennsylvania that were settled by the Mennonites and Amish. William Penn (1644-1718), founder of Pennsylvania, was seeking colonists for the Pennsylvania area. The Amish and Mennonites both settled in Pennsylvania as part of William Penn's "holy experiment" of religious tolerance. The first sizeable group arrived in America around 1730 and settled near Lancaster County, Pennsylvania.

These settlers were addicted to pies of all types and they ate them at any time of day. The most famous of their pies is the shoofly pie. As the very earliest settlers came to North America by boat, they brought with them the staples of their diet - long-lasting nonperishable that would survive a long boat trip. These staples were flour, brown sugar, molasses, lard, salt, and spices. Arriving in the new land during late fall, they had to live pretty much on what they had brought with them until the next growing season. The women, being master of the art of "making do," concocted a pie from the limited selection that could be found in the larder. This resourcefulness led to the creation of shoofly pie.

The origin of the name has been debated for years and will probably never ultimately be solved. The most logical explanation is related to the fact that during the early years of our country, all baking was done in big outdoor ovens. The fact that pools of sweet, sticky molasses sometimes formed on the surface of the pie while it was cooling, invariably attracting flies, show how such a pie could come to be called shoofly pie.
************
Preheat oven to 400 degrees F.

Dry:  In a large bowl, using a pastry blender, cut shortening or butter into flour, brown sugar, and salt until mixture is the size of small peas; set aside. (reserve 1/2 cup for topping)

Wet: In a large bowl, mix molasses and egg and 3/4 cup hot water. In a small bowl, mix 1/4 c. water with baking soda. Combine all wet ingredients and whisk until soda quits foaming.

Bake 10 minutes and then reduce oven to 350 degrees F. Bake an additional 35 to 40 minutes or until a knife inserted in center comes out clean. 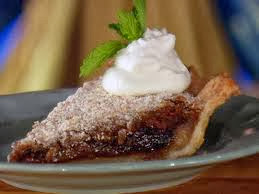 OH MY GOODNESS...I had no idea it would be so entertaining to look back on my blogging life.  I had completely forgotten this little booklet...and I AM SO GLAD I BLOGGED ABOUT IT.  Altho, this particular blog post has given me a mission.  I MUST FIND THIS BOOK...it's gotta be in this house somewhere...surely, I put it in a safe place.

I have LONG been a collector of all-things-laundry. I love pictures of women (or children) hanging up clothes...
HOLY COW...doing laundry was an unbelievable amount of crushing, back-breaking hard work. One whole chapter in the book was about Planning the Week's Work, with an outline for your Daily schedule...YIKES...I am trying to imagine the world my women ancestors lived in...they had to make their own soap...soak the clothes for several hours (or overnight)....then build a fire...rub each garment on a wash-board...then wash in small loads (the book recommends sorting into five different groups).

Squeeze out the water. Then BOIL the various loads of laundry (a clean stick is recommended for this step). Rinse in two or three different waters. Then Blue the laundry. Starch the laundry. Hang the laundry out (putting pieces of a kind together, and have the threads of the cloth straight). Take down, piece by piece, and fold. Dampen. Roll Up. (never dampen more than you can iron in one day). Then iron.

OH MY GOD....I love my life. And I am very grateful that I was born AFTER the invention of the automatic washing machine...
Next week the Monday post will be some tips about how to dry your laundry.  Don't worry, I understand that most of you don't have access to a clothesline....hey -- I have a clothes dryer, too!!
at 2:00 AM 3 comments:

Hey -- looking for some OLD posts to run during my winter break has been kinda fun.  I originally wrote this one way back in 2012 --because I always had so many questions about my painted luggage.  Altho it's very easy to do, I've learned some tricks along the way...

Of course, my starting point is always a thrift store.  I have never paid more than $8 for a rolling duffel.  So -- START THERE.  Because there are always LOTS OF BAGS in thrift stores -- most of them in excellent condition -- my theory is that many people buy luggage for a specific trip,  then stick it in a closet.  Five or six years later, they are cleaning the closet (moving to a smaller house), and they remember how much they HATED traveling.... 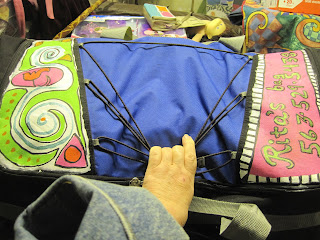 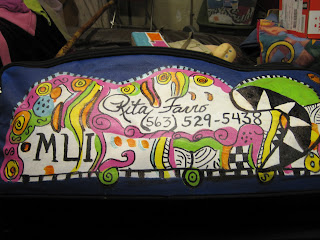 Actually, it's one of my FAVORITE THINGS TO DO...

Other people watch the dozens of black bags go around and around the airport carousel... wondering which one is theirs...because THEY ALL LOOK ALIKE...

My bags have been to many, many airports over the years...including Memphis... 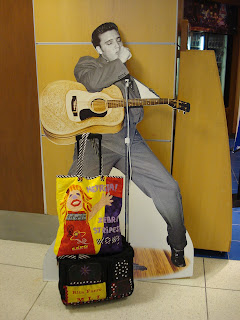 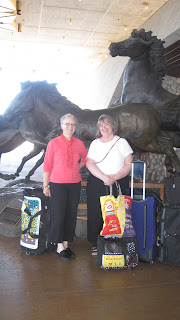 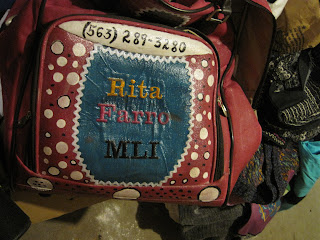 Here are the steps:

Believe me -- this paint job will last MUCH LONGER THAN THE BAG ITSELF..

Optional: If you want to add EMBROIDERY to your bag, you still should Mod Podge the area you are decorating. Embroider the words you want on the fabric, then cut it to fit into a specific area. Use Peel n'Stick to apply the embroidered fabric piece to your suitcase -- Then two coats of Mod Podge to protect the embroidery. 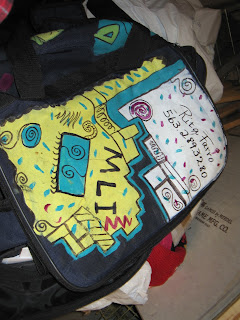 Sadly, last year, two of these bags were destroyed by the rough handling. Ugh. One had the handle ripped off...another lost a wheel... 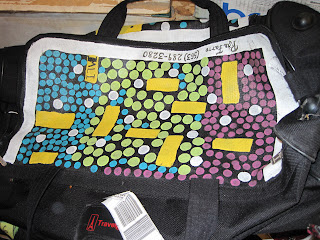 Treating them with the respect they deserve, like a worn out American Flag, or a treasured Lazy Boy recliner -- I had a little funeral and burned them...