I often travel with other women. It has been one of the joys of my life. (you know who you are!)

And the BEST TRAVEL TIP I EVER LEARNED (from Mary) was to put money into a "pot"...to pay for those things that will be shared.

Neither Amy nor Nicole had ever been to New York...I'd been working on our itinerary for weeks...and I sooo wanted them to enjoy this trip. Here's an email I wrote to them...the week before...

....To handle the finances -- we will each put $300 cash into the "NYC Pot". I have the perfect zippered pouch -- and I nominate Nicole to be our official banker.

That money will pay for cabs, tips, ubers, subways, restaurants,etc. Anything the FOUR of us do together can come out of the pot. We'll often be sharing food...this is much easier than asking for "separate checks"...

Obviously, you should have your own money to pay for those things only you want to do. That includes alcohol, Starbucks, cigarettes, illegal drugs and hookers.

Anyway. Our FIRST job, after arriving at our hotel, was to sit down, and put our cash into the "Money Pot".
And, for the next three days -- Nicole paid all the bills. We'd go into the subway, and Nicole would hand each of us a $20 bill to get our MTA passes. At a restaurant, the bill would come to the table, and Nicole would pick it up. Getting out of a cab, somebody would say, "Nicole, you've got this?"

IT WAS SO EASY.   By Sunday night, I heard Nicole talking to her husband on the phone and she said, "I've been paying for everybody all weekend...it's always Nicole, get this, Nicole pay for that, Nicole, tip the bellman...all I do is pay, pay, pay..."
at 2:00 AM No comments:

I cannot imagine anybody packing MORE INTO ONE DAY than we did.

That night, when we came up from the subway at 50th Street...I realized THERE WAS NO OUTSIDE LINE UP AT ELLEN'S STARDUST DINER...!!

I hesitate to even blog about this place...because, clearly, social media has damn near ruined it. There is ALWAYS, ALWAYS a line out the door and down the block. I never got to take Lilly there...and last year, when I went with my sister Deena, her granddaughter Maddie and our friend Val -- it was a complete stroke of luck that we hit it on a rainy afternoon.

What makes it so special?   The wait staff SINGS. And these young people, who are taking your order and bringing your food -- all came to New York because they want to make it big on BROADWAY.  They are the cream of their high school crop...or their college glee clubs...But, in New York City, they are swimming in a MUCH BIGGER POND.  So -- between auditions -- and, right before they get cast in a hit musical -- they WORK AT ELLEN'S.

After our afternoon at the Tenement Museum, we made our way (via Subway) to Greenwich Village.

After starting our day at 4:00 AM...the TODAY show, the Vessel at Hudson Yards, the Staten Island Ferry, Statue of Liberty, the 911 Memorial, Katz's Delicatessen, the Tenement Museum, Washington Square Park, Greenwich Village, Monday Night Magic and Pomme Frites...you might think THIS DAY IS OVER...

But you would be wrong.

There is one final moment of Ritaluck...

So -- our day began in Midtown -- at Rockefeller Center and the TODAY show. Then, we took the subway across town to our second ticketed event -- the VESSEL at 10:00. Then, all the way down to Battery Park and the Staten Island Subway, up to the 911 Memorial and the Occulus...

Gheesh...it makes me tired just WRITING ABOUT this day. By the time we got to Katz's Deli, we were starving.

Our third "ticketed event" of the day was the Tenement Museum.

Over the years, you have read many of my various NEW YORK CITY blog posts...but you rarely see mention of an actual "Museum visit". Even though New York City has many world-class museums -- my visits to this beautiful city are just too brief. Most of the time, I only have three or four days -- and the people I'm with want to see the "highlights". So Museums just don't make the cut...

Don't get me wrong. I know what they're missing. I have been to the Metropolitan Museum of Art, MOMA, and the Guggenheim. I have even ventured into the Whitney, the Frick Museum and the American Folk Art Museum. But, if I'm being honest -- most of them are way over my head. I don't have a big appreciation for art -- or artifacts -- also, I'm afraid I have a limited attention span...

But -- this place is different. 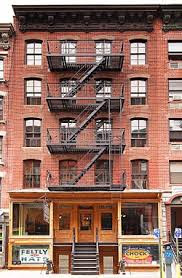 The Tenement Museum at 97 Orchard Street (on the lower East Side) is a very unique place.

For over 100 years, it housed thousands of immigrants landing in New York City...but, in 1935, it was abandoned. And it stood -- empty and dilapidated -- for over 50 years.

When they opened it up -- the tiny apartments inside this building were like time capsules...


There are several "apartment tours" to choose from. The best thing about a Tenement Museum tour is they are small groups (10 people) -- led by a real person "docent". I chose the "Sweatshop Workers" tour.

The Garment Trade and the Immigrant Experience Immigrant garment workers past and present have many experiences in common. They all share the memories of long hours hunched over sewing machines, the hiss and heat of pressing irons, and the goal of making a better life.

The Levines and Rogarshevskys, like many immigrants of their time, found a livelihood in the garment trade, New York’s largest industry. The Levines operated a garment workshop in their tiny apartment at 97 Orchard in 1892.

Harris Levine, the patriarch, hired three workers and worked long 15-hour days, stopping only to observe the Sabbath each Saturday. A family of six, the Levines managed to raise their children and compete with other garment shops for 13 years — and all within a 325-square-foot apartment.

The Rogarshevkys faced a similar living challenge in 1908. With six children, the Rogarshevskys creatively squeezed into their tiny three-room apartment at 97 Orchard Street. The patriarch, Abraham, earned a living as a garment presser in one of the neighborhood shops. It was a job that would take a tremendous toll both on Abraham and his family.
********

Standing in that cramped little apartment...in the very spot where those immigrants lived and worked. I thought about how terrified they would have been...coming to America was like landing on the Moon. Was it brave? Or desperate?

Taking that giant leap of faith...to this unknown world...the sacrifices those families made...going to a foreign country, where you didn't speak the language. Living in a tiny squalid 300 sq. ft apartment with a dozen other people...working for pennies...all for the hope that your children would have a better life.

Most of us came from those humble beginnings...but it's an easy thing to forget.

Here's the thing.  WHAT WERE THEY THINKING?  I've been to the Oculus twice and I just don't get it. You go to this hallowed ground to visit the 911 Memorial, then the Oculus expectation is that you'll be in the mood to shop for some high fashion, maybe expensive jewelry or the latest in Apple electronics? It's just incongruous.  And it is very...well....disappointing....

Our lunch at Katz's was a.m.a.z.i.n.g.  I wish I had a better vocabulary...because there just aren't words.  We ordered one corned beef on rye, a Rueben, an order of fries and a potato knish.

So, in many ways, THIS IS OUR BIGGEST DAY in New York City. If we count the TODAY SHOW -- we actually have four different "ticketed" events -- and I wanted to pack in as much NYC as we could -- around those events....

Also, in keeping with my philosophy of having one special "food" event every day -- this day will be our Jewish Deli experience. Katz's, of course!

As we were moving around on this day -- we were on every subway line in the city.  However -- the subway is $2.75 per ride.  And, since there are four of us, it is sometimes cheaper to take a cab. (remember -- we are doing New York ON A BUDGET.)...


Just taking a ride on the #7 subway to Hudson Yards was an experience. It is a wonder than anything this big or grand or ambitious could be built in New York City.   But then again, when I think about it, NYC is probably the ONLY place in the world where this could happen.

I think it is fascinating...and here's the wikipedia link, if you'd like to read more about it. https://en.wikipedia.org/wiki/7_Subway_Extension
at 2:00 AM No comments:

Monday was another REALLY BUSY DAY. I was so excited about everything we had planned for this day. The girls wanted to go to the TODAY show...and, after that, we had tickets for the VESSEL -- the newest addition to the New York City landscape. Altho the tickets are free -- you have to go online to get them. When Amy got the tickets for Monday, April 8 -- I completely changed our NYC itinerary to accommodate this very special event. It just opened two weeks ago -- so getting those free tickets was A HUGE SCORE...


·       THE VESSEL WAS AMAZING…we went inside the shops, did a bit of a walkaround…


·       We got on the Staten Island Ferry, took some pictures of the Statue of Liberty.


·       We walked to the Tenement Museum (103 Orchard Street)  for our 4:15 Tour.  It was about the lives of immigrant families, who were garment workers at the turn of the century…


·       Then, we walked over to Washington Square Park and walked around.


·       After the show, we went across the street to POMME FRITTES…where we actually got a table.  You needed a code to get into the bathroom, and had to push a button to get out. 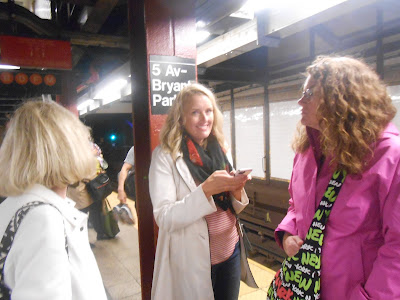 It's not often you experience a seminal moment -- and KNOW THAT'S WHAT'S HAPPENING.

But, on Sunday morning, April 7, 2019 -- at 10:32 AM -- I knew I was having one. After the four of us left Bergdorf Goodman's -- we walked across the street to the corner of Central Park. Nicole and Amy saw a vendor renting bicycles...

They turned to me and said, "can we ride bikes around the park?"

And I knew my work here was done. These two young women were completely at ease in this beautiful big city. Soooo far from their lives in Iowa. Yet they had the MTA app on their phone, they were completely comfortable going off on their own -- to ride bicycles all around Central Park.

We left the flea market, and started to leisurely walk down the street -- enjoying the beautiful day -- when we STUMBLED ON TO AN ACTUAL THRIFT STORE..!!

AFTER the girl's broadway show (Come From Away -- which they LOVED)...it was on to our big food event of the day! CARMINE'S on 44th Street...