Hello to a beautiful SATURDAY in Iowa!! This post is just a lot of random shots of me, traveling with my girlfriends...

Because I'm getting ready for my BIG MAY TRIP up to Beaver Dam, Wisconsin.

Mary Mulari and I will be doing our ALL NEW MIDWEST YA YA SISTER ACT for the Thursday night event at Nancy's Sewing Weekend.

Our presentation this year is all about GIRLFRIEND TRAVEL -- and you know what A BIG FAN I AM of this kind of activity.  At this point in my life, it is my mission to plan at least one out-of-town girlfriend trip each month... 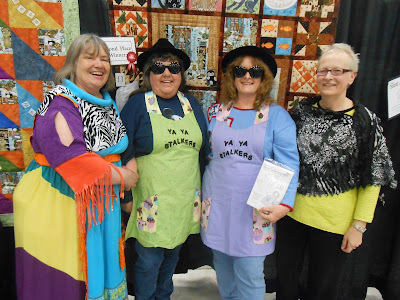 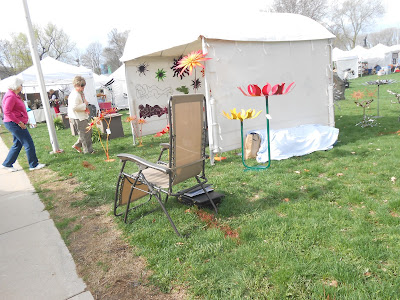 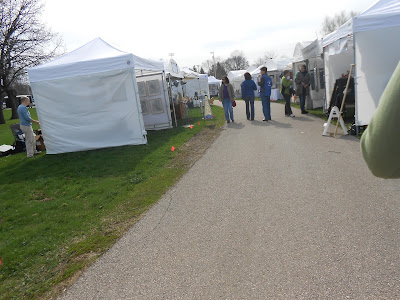 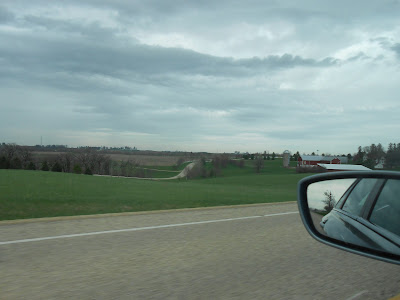 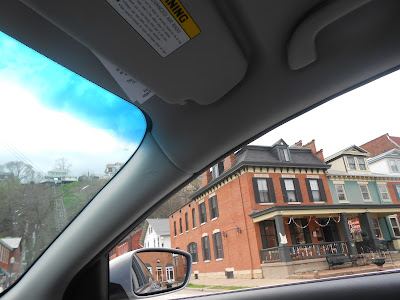 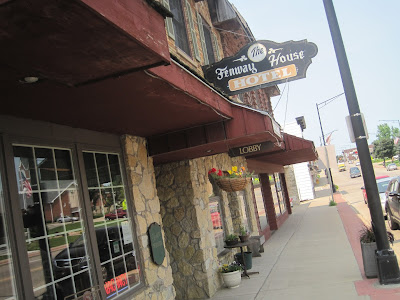 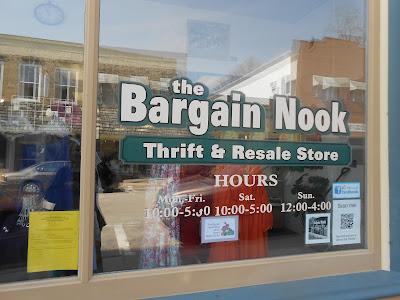 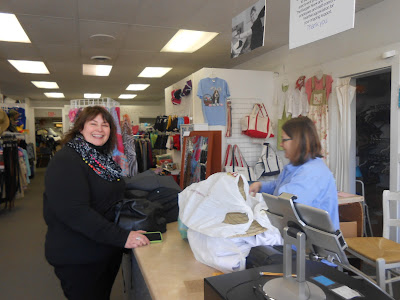 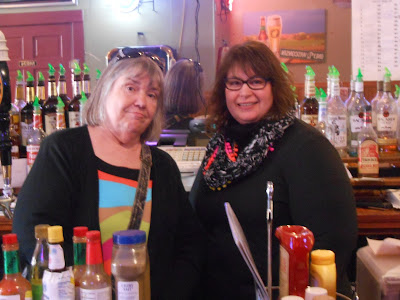 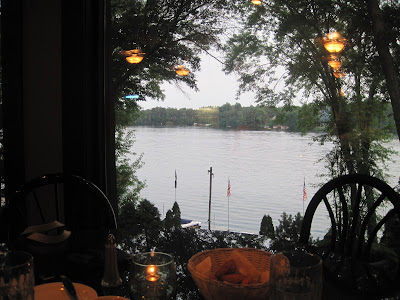 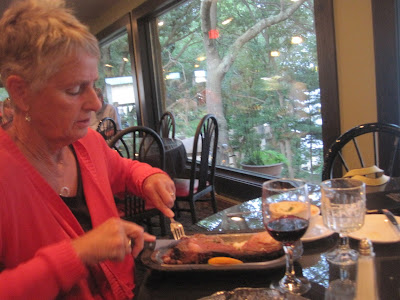 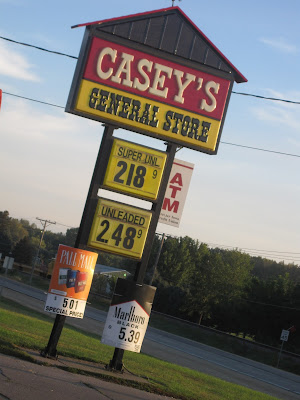 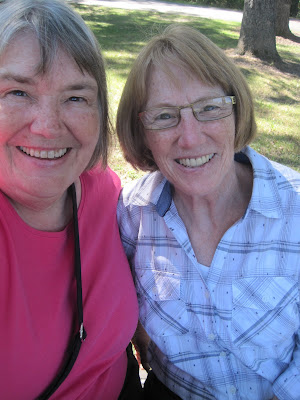 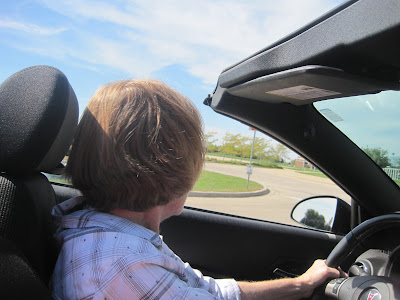 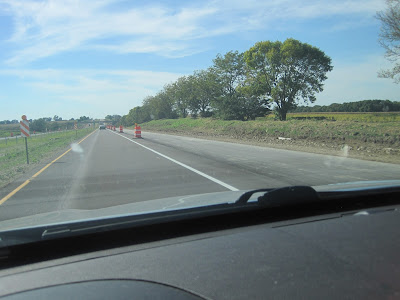 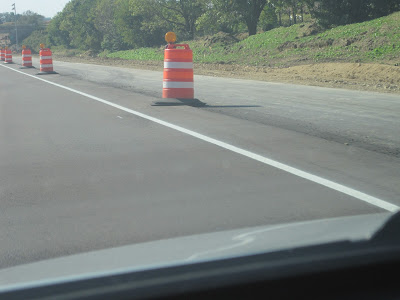 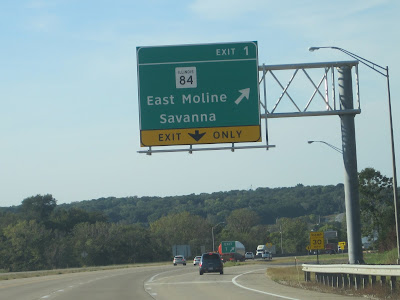 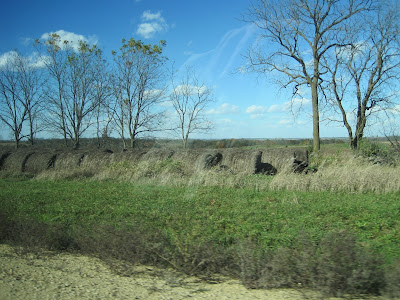 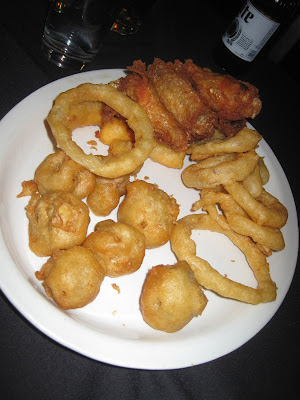 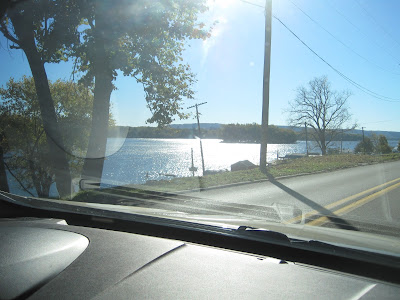 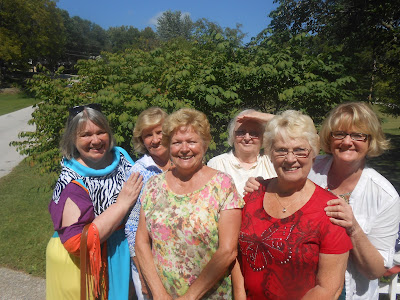 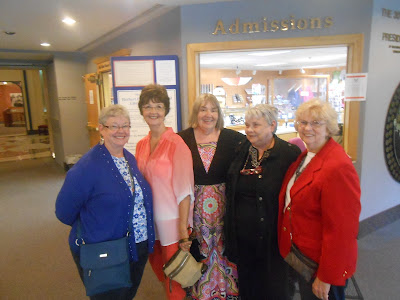 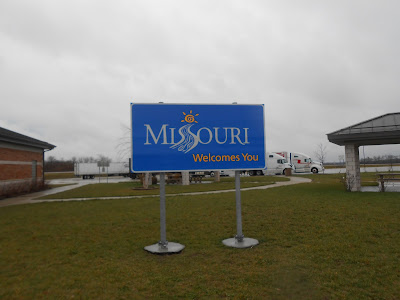 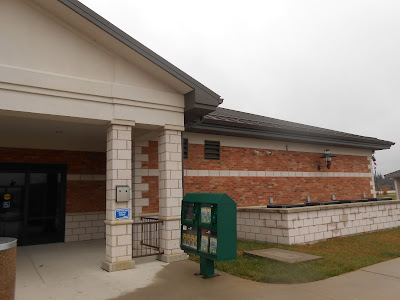 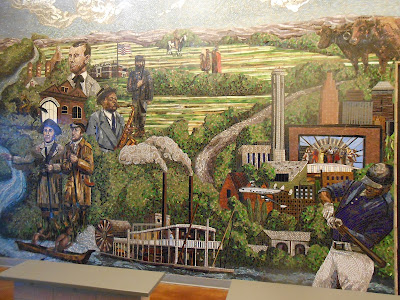 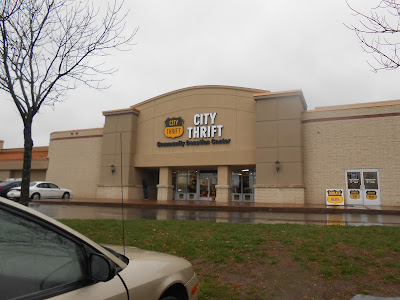 ALL NEXT WEEK this blog is going to be about rehashing some of my favorite girlfriend trips. Hopefully, you'll be inspired to plan a trip of your own!!

And we hope to see you IN BEAVER DAM, WISCONSIN next weekend!!

Friendship is a funny thing. You never know how or when it's going to happen. And no two are alike.

One of the best things about going to see Mary in Aurora, Minnesota, is having a chance to visit with her peeps..who have become my peeps...

The last two summers, I've gone up there for the Northern Lights Music Festival. And we always do THIS...

On these occasions, Nancy buys my breakfast because I deliver some "Ritawear".

Thrift store shopping for Mary's friend Nancy started many years ago, when Mary and I went "dumpster diving" at the Goodwill Outlet in Seattle.  Mary found a fleece shirt she thought Nancy would like as a bed/reading jacket. She took it back to Minnesota, washed it, wrapped it in a ribbon, and presented it to Nancy, along with the story of where it came from. (you never know how dumpster clothing gifts might be received).

Nancy was delighted -- and shopping for her became a fun part of our treasure hunts...all over the country. There was one hot pink silk jacket, in particular, that cost 25 cents from the local STUFF store...that became Nancy's signature piece.
Nancy is one of those friends you can't get ahead of. If you give her a gift, she gives you twogifts in return. And then, another one for good measure...and another... She has sent me beautiful knit scarves, and kitchen towels, pot holders....and mesh scrubbies...

After my most recent visit, UPS just keeps coming...there is Porketta spice packets, along with recipes, and Potitca...and, well -- here's a link to some of the FOOD GIFTS she sent...

SO GUESS WHAT??   MY SPRING PORCH PARTY will feature food from the Iron Range!!

Do you know what sandwich loaf is??

If things are going right in my world -- Thursday is WARREN DAY at my house. He sleeps here on Wednesday, and every Thursday we spend the day playing and exploring the world together.
Years ago, I bought this huge collection of hand-carved wooden toys at an auction for $15. Warren wasn't even born yet -- but I thought it was sad that somebody did ALL THAT WORK -- and it was about to be sold for next to nothing.

March is the Farro Women Birthday Month. Lilly is March 9th, Emily is March 22, and mine is March 29. So we keep busy making chocolate cake with peanut butter icing!!
Lilly was having her Spider-man themed birthday party at the Princeton community center. The day before the party, she said, "Mom tried to hire a girl who does face painting, but she was busy."

She seemed so disappointed, before I knew it, these words were coming out of my mouth, "I could paint faces, hon. Let's go to Michael's to buy some paint."

I mean -- how hard can it be to paint children's faces? The paint we bought had an idea sheet, with the example for Spider man that looked pretty simple...we bought some extra red paint...


How hard can it be to paint some red Spider man masks? Simple, right?

Except that when the kids came to sit down at my Face Painting table, they took one look at the example sheet -- and they thought they could pick ANY DESIGN FOR ME TO PAINT ON THEIR FACE...

My first customer was my great-nephew, 6 year old Oliver. He was looking at the design sheet, when I told him he had to be Spiderman. Although he was disappointed, he went along with my plan...

Then, the next customer was a little girl from Lilly's class.  She picked out a puppy face...and when I was about to insist on Spiderman -- I realized the puppy face was WAY EASIER TO DO...a few spots, and a circle around her eye...

WHAT WAS I THINKING??  To hell with Spiderman!!


As it turns out -- washable means "at some point, if you use the right soap, and rub hard enough"...

For my own birthday, imagine my surprise when I got a GIANT BOX OF FLOWERS delivered...!!
Our Birthday month was TOTALLY PERFECT. Lilly was delighted with the face painting at her party. Although -- even SHE didn't pick Spiderman!! (she had black butterfly lines on her face for 3 days). Poor Oliver was my only red Spiderman mask.

We ate our fill of chocolate cake with peanut butter icing...Lilly enjoyed her annual Porterhouse steak...WE WENT TO NEW YORK CITY...and my flowers lasted for almost two weeks.
at 2:00 AM No comments:

Our local high school always does a spring musical, and this year, I was delighted to see they were presenting, "The Little Mermaid". Of course, the best part is getting Lilly and Warren  ramped up for the performance. We went to the library to rent the movie so Warren would get the gist of the story. (Lilly loved this movie when she was 4 years old, and she remembers every word of every song.) 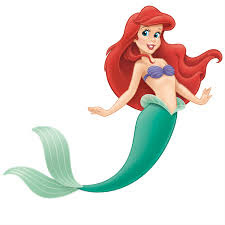 They rented the costumes from a company in St. Louis -- and they were spectacular! Although, we were told in NO UNCERTAIN TERMS NO PHOTOGRAPHY -- take my word for it -- the Mermaid outfits were beautiful, and the cast was terrific.

Now a junior in high school, our very own Keegan Harry, from Princeton, was Prince Eric -- and his voice is incredible. We all believe that young man is headed to Broadway.

The best thing about a high school performance is the reasonable ticket prices. It only cost $22 for the three of us to get into the play. And, for a measly $5 extra (per kid) they each got a blue plastic trident (like a sword, with three prongs) that lit up!! During two of the songs, the youngsters were encouraged to dance in the aisle with their blinking tridents.

Everything I said is absolutely true.  So -- where is the hook in this perfect bowl of shrimp? I mean, nobody does kid stuff better than Disney -- right??

After attending The Little Mermaid -- I left there thinking Lilly and I had to have a serious talk.  Because the message was really kinda awful....

Here's the story (in a seashell):

Ariel is a mermaid, with a beautiful singing voice, a loving father and five sisters. In the first scene of the play, she fails to show up at a huge performance where she is the featured singer.

She is not content with her Mermaid life -- she wants to be a human.

After seeing the Prince from a distance, she falls in love with him (because he was SO HANDSOME, of course).

Ariel makes a deal with the evil sea witch, Ursula. In exchange for her voice, she gets three days with legs. IF the handsome prince kisses her at the end of the three days, Ariel will remain a human.

Knowing this will be difficult (with no voice), Ursula tells her to use her beauty -- and her body language...

There ensues a lot of back-and-forth...Eric falls in love with the beautiful, mute Ariel; the evil Ursula is killed; Ariel's voice is restored and her father gives in to her desire to become a human. Ariel and Eric marry and sail off on a ship to live happily ever after.

SO -- to sum it up: The heroine of this story is NOT HAPPY with her body. She refuses to listen to her father, and even fails to show up at a performance where she is the star. She falls in love with a man just because he is handsome. Despite the fact that they never have even one worthwhile conversation -- he is smitten by her beauty and "body language"...and, at the end of the story, she gets everything she wants. 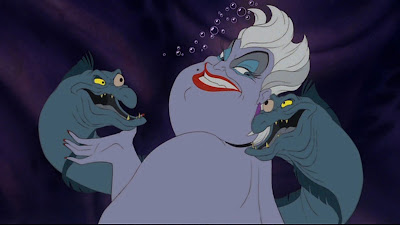 So, I guess I'm gonna go on record as THE ONLY GRANDMA IN AMERICA who has a problem with The Little Mermaid.

Really. And then we wonder why our little girls have body image problems??
at 2:00 AM 2 comments: