Inside the New York Public Library, Rita gave her 5-minute seminar on “Thank-you, Andrew Carnegie, for building over 3500 FREE libraries all over America.”....Then, we walked past Bryant Park...and up five short blocks to Times Square...

The time was getting close for our theater. At 2:30, we rushed over to the Schoenfeld Theater, at 236 W 45th St (which was just across the alley from the 46th Street side of the Edison) to get our tickets from the Will Call booth.  I'd left the paperwork in the room, but Val had the order number on her smartphone...so we were able to get our tickets. 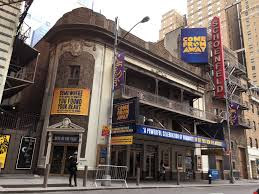 Come From Away is based on the true story of when the isolated community of Gander, Newfoundland played host to the world. What started as an average day in a small town turned in to an international sleep-over when 38 planes, carrying 9,000 people from across the globe, were diverted to Gander’s air strip on September 11, 2001. Undaunted by culture clashes and language barriers, the people of Gander cheered the stranded travelers with music, an open bar and the recognition that we’re all part of a global family.

This was the one event I worried about when I was putting our itinerary together. Neither Deena nor Val had never heard of the play, and Maddie might be too young to understand what happened that day. 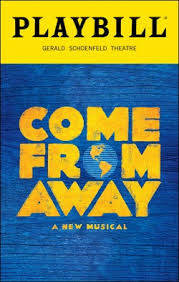 BUT -- I NEEDN'T HAVE WORRIED. The play was spectacular (really, I am running out of adjectives for this wonderful trip!). It was just amazing how they put it all together and told this amazing story, with only 12 actors and a few chairs on the stage.  We felt like we were watching 16,000 people come together on the worst day of their lives...

Deena and I sat together and we were both crying...Val and Maddie sat across the aisle.  Maddie said she wished she had a tissue for the woman sitting next to her. When we walked out, both Deena and Val said if they could get a ticket for that night, they would GO AGAIN.

Deena downloaded the music on her phone before we even got back to our room!! 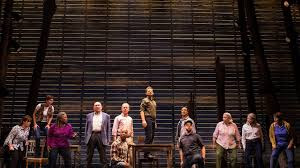 What would be a perfect ending to this jam-packed, wonderful day??